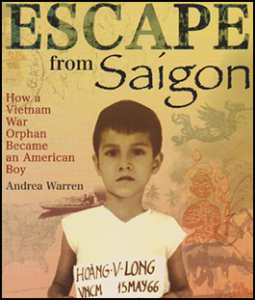 Escape From Saigon:
How a Vietnam War Orphan
Became an American Boy

Overview:
Escape from Saigon: How a Vietnam War Orphan Became an American Boy is the story of one of the orphaned children who in the final chaotic days of the Vietnam War was airlifted from Saigon as part of what became known as Operation Babylift.

Today Matt Steiner is an emergency room physician. But once he was a thin little boy living in Saigon, South Vietnam, with his elderly grandmother, who struggled to earn enough money to feed him. When she could no longer do so, she asked an American agency, Holt International, to care for him. Holt sought to find adoptive families in the United States for children like Matt. As he waited for a family, Matt struggled with his feelings of abandonment, first by his mother and then by his grandmother. He also worried about the war, which was drawing closer to Saigon.

This project is dear to my heart, for my adoptive daughter was an orphaned infant in South Vietnam who also reached the United States via Operation Babylift.

Booklist:
“Always true to the child’s viewpoint, Warren’s clear narrative, with many documentary photos, begins as the boy struggles to survive in Vietnam. . . to his terrifying evacuation on a plane under fire. Framing the biography is fascinating information, including Warren’s account of the evacuation of her own adopted baby daughter on Operation Babylift.”

Kirkus:
“Lavishly illustrated with archival photographs, the narrative is interspersed with just the right amount of war history, never losing the focus on Long and his experiences and ratcheting up the emotional intensity as he lifts off from Vietnam and lands in Chicago.”

Publishers Weekly:
“Warren’s compelling, emotionally charged account focuses on Long, a boy born in 1966 in a small village in South Vietnam (to a Vietnamese mother and “an unknown American father”). . . .Dramatic accounts of other Vietnamese and American people’s escape from Saigon on the eve of its collapse plus numerous b&w photos round out this informative book and help bring into clear focus the Vietnam War’s effects on children.”

Alan Review:
“Escape from Saigon is compelling enough to read in one sitting and stays with you long after you put it down.”

School Library Journal:
“A personal story . . . so well written that it will be sure to hold readers’ attention…. Outstanding.”