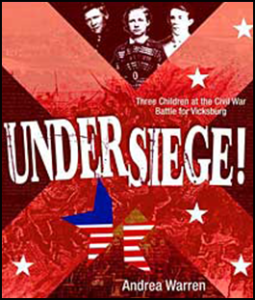 Overview:
From the beginning of the Civil War, a major Northern objective was to control the entire Mississippi River. It was America’s great water highway and flowed for 2,000 miles, all the way from Minnesota into the Gulf of Mexico at New Orleans. Seizing control would split the Confederacy in half and allow the Union Army to invade deep into Southern territory.

Standing in their way was Vicksburg. The city of 5,000 residents was located on the river, half way between Memphis to the north and New Orleans to the south. Atop its bluffs overlooking the river were batteries of canon ready to blast away at any Union ship that dared try to pass.

President Abraham Lincoln was determined to silence the guns at Vicksburg and take control of the Mississippi River. He selected Ulysses S. Grant to do the job. What followed was a long and bloody campaign that culminated in a 47-day siege.

During the siege, Grant shelled the city around the clock. He knew there were as many as 1,000 children inside Vicksburg, but this was war. Food supplies dwindled to almost nothing, and injured and sick Confederate soldiers overflowed local and military hospitals. To stay safe from falling shells, townspeople dug caves to live in, and as a result, there were few civilian casualties. But neither the townspeople nor the soldiers could hold out indefinitely. Vicksburg surrendered on July 4, 1863. The North controlled the river at last, hastening the end of the war.

I selected three children to tell this story through. Lucy, age ten, and Willie, eleven, lived in Vicksburg. Lucy’s father was a well-to businessman and Willie’s a prominent minister. Lucy and Willie endured hunger, fear, desperation, and brushes with death. They lived in caves with their families to escape the bombardment and they both went hungry.

The third child, Frederick, then twelve, was the son of General Ulysses Grant and was with his father during the siege of Vicksburg and the five battles leading up to it. (Wives and children sometimes visited their husbands/fathers, but few stayed for six months, as Fred did.) He saw the horrors of war firsthand and suffered from illness and from a bullet wound that almost cost him his leg.

Frederick was there voluntarily, but Lucy and Willie were trapped by an invading army, and they endured suffering no child should have to experience. In actuality, many children suffered in the Civil War. Together, Lucy, Willie, and Frederick become our eyewitnesses, allowing us to see what it was like that summer of 1863 when an invading army pitted its force against a resolute little city and its staunch defenders at a place called Vicksburg. What happened next helped change the course of the Civil War.

School Library Journal
“Excellent use of primary-source documents, maps, diagrams, and period reproductions adds depth and interest to what is almost a day-by-day recounting of this crucial siege. This volume is not only an excellent source for reports but is riveting historical reading as well.”

VOYA
“Warren creates a compelling account of the 1863 siege at Vicksburg that follows three young people from December 1862 through the aftermath of the surrender on July 4, 1863. Several elements make this effort stand out among Civil War books.”