Why do you write for young readers?

I also write for adults, but I especially like to write for young readers. I was an avid reader as a kid, and books strongly influenced me. I lived in a very small town, but because of books, I knew a great deal about the world. We can live and learn through the experiences of others. I hope young readers do that through my books.

How did you get started writing books for young readers?

Growing up, I would hear occasionally about orphan trains, which had been active in my home state of Nebraska before I was born. I was a magazine writer for a long time and at some point I decided to write a couple of magazine articles about the orphan trains. As soon as I started my research, I knew that I would have been fascinated by this story when I was young, and I was certain that today’s readers would be as well. I began to envision my first nonfiction book for young readers. Working with an agent in New York City, I created a proposal for the book that became Orphan Train Rider: One Boy’s True Story, which was published in 1996 and won the prestigious Boston Globe-Horn Book Award. After that, there was no looking back.

Why have you chosen to write history?

The simple answer is because I love it. I’ve always been drawn to people’s stories and to events that have shaped the present. I love historical fiction, too, but I choose to mostly write nonfiction history because I enjoy the challenge of finding the core of the story and then writing narrative that’s just as engaging as fiction. Writing nonfiction is much harder than writing fiction since I cannot make up anything, but if I do my job right, readers are swept up in a true story of young people who have experienced tremendous challenges. In the process, readers learn about history and wonder, “What would I have done if that had been me?”

Why do you write about young people?

The past is prologue. It helps us know who we are and what human nature is all about. Children tend to be part of our “hidden” history, as are the stories of women and minorities. We don’t hear children’s voices nearly enough–yet they were either at every significant historical event, or they were directly affected by it, and their history and perspectives are important. And I think when young readers read about boys and girls in the context of history, they find that more engaging than always reading about adults. Consequently, they learn more. I also write about young people because I find them so interesting.

Which of your books is your favorite?

To do my best, I must believe that whatever book I’m working on is my favorite. However, in looking back over the books, I realize that I am partial to Pioneer Girl. It’s the least dramatic of the books I’ve written, but I can’t get past how hard those homesteaders worked all their lives. I greatly admire them.

How do you research and find the photos for your books?

This is always a huge challenge, but it’s easier than it used to be, because many photo archives are now on line. The Library of Congress, for example, has an extensive online archive, and that was very helpful in finding photos for Under Siege! Three Children at the Civil War Battle for Vicksburg since it is about American history. For Charles Dickens and the Street Children of London, I used professional archival companies. Once you locate a photo you want, you must secure permission and pay a users’ fee to have it appear in the book. The entire process involves many, many hours of work.

I’m usually at work by 8:30, and I stick with it until 5 p.m. or so, when I exercise, run errands, or visit with friends. I’m at my most creative in the morning and I try to get several hours of uninterrupted time to work. I am more likely to attend to editing and business tasks in the afternoons. I like to read every evening and sometimes I also do editing work then.

What else do you enjoy doing?

After reading, travel is my favorite thing. I love the theatre, movies, walking, and socializing with friends and family. I am always happy on a beach, and almost always happy in a museum.

Why are you wearing a tiara in this photo? 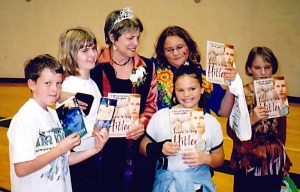 Good question. That picture was taken in Emporia, Kansas, when I received the William Allen White Award for Surviving Hitler. As part of the awards ceremony, I was given a tiara to wear all day (I still have it!). I also got to lead a parade through downtown Emporia. Jack Mandelbaum joined me on stage for the ceremony, which was a thrill for the 750 middle school students who were there and had read the book. They were among the Kansas students who voted Surviving Hitler as the winner of this wonderful award. I am the first Kansan to receive it, making it extra special for me.

What’s the most interesting place you’ve given a program about one of your books?

Several are memorable. I loved being invited to the North Platte, Nebraska, Public Library to introduce Pioneer Girl: A True Story of Growing Up on the Prairie. Two of Grace McCance Snyder’s daughters were present, along with a slew of other relatives, and Grace’s exquisite quilts formed the backdrop for my talk. Visiting my hometown of Newman Grove, Nebraska, for a class reunion and giving a book talk at the local library is also a special memory, for I had childhood friends and classmates in the audience.  Perhaps the most unusual place was in Rwanda, in East Africa, where I introduced Surviving Hitler: A Boy in the Nazi Death Camps to a group of Rwandan educators preparing to use the book with students studying the 1994 Rwandan genocide. I also won’t forget being at the United States Memorial Holocaust Museum in Washington, D.C., with Jack Mandelbaum for Surviving Hitler. That was a powerful and moving experience.