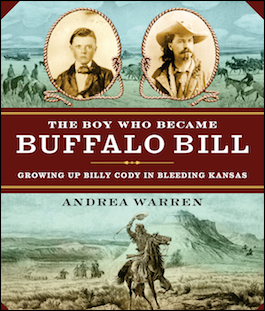 The Boy Who Became Buffalo Bill: Growing Up Billy Cody in Bleeding Kansas chronicles the childhood of William F. Cody, known to everyone by his nickname, Buffalo Bill. Called Billy as a child, he was fearless, brave, and always protective of his family. This kept him busy, for the family had emigrated from Iowa, where Billy was born in 1846, to Kansas Territory when it was opened to settlement in 1854. Congress had decided via the Kansas-Nebraska Act that settlers in these two territories would determine by vote whether they would enter the Union as free or slave states.

Nebraska was sure to be free, so the contested prize became Kansas. Abolitionists and pro-slavers headed to Kansas for the showdown. It would take seven years of bloodshed before Kansas entered the Union as a free state, just months before the Civil War began. During those seven years, the issue of slavery played out on Kansas soil through violence and vengeance. Billy lost his father in the mayhem and at age eleven became his family’s primary means of support.

He worked as a herder, rode the Pony Express, and hired out on supply wagon trains headed west. Along the westward trails he mastered the skills of riding, shooting, hunting, and scouting. He also got to know Native Americans and several famous Mountain Men.

With troubles heating up in Kansas, he joined the infamous Jayhawkers at age sixteen, riding across the Missouri border to wreak mayhem on pro-slavers. When the Civil War began,he joined the Union Army, where his duties sometimes included work as a scout and spy. 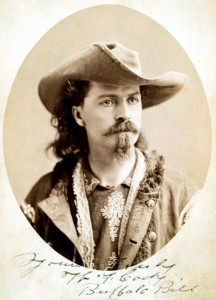 After the war he returned to the plains to work as a buffalo hunter and as a scout and guide for the army. His nickname of Buffalo Bill earned him the attention of a dime novelist whose fictional Buffalo Bill brought fame to the real Buffalo Bill.

Gradually Bill worked his way into show business, while continuing as a scout and guide for the army. Soon after that he started his Wild West show, and for the next forty years, Buffalo Bill was always center stage.

Generous to a fault and not always the best businessman, Bill burned through several fortunes while enjoying his role as the most famous American in the world. His show became the precursor of the rodeo and the movie western. Bill had his problems—alcohol was one of them—but he worked for the betterment of many as a philanthropist, conservationist, and supporter of women’s rights. Through it all, he was cheerful, energetic, and beloved by those who knew him and who worked for him. He died in 1917 at the age of 71. His legendary status continues today.

In The Boy Who Became Buffalo Bill, readers learn about Billy’s life and adventures, often in his own words. They also experience westward expansion, the slavery conflict in Kansas, and what life was like for frontier children. Most importantly, they meet a heroic boy who stepped into adult shoes to care for his family and fight for his country.

School Library Journal:
“This unputdownable adventure reveals the human side of Buffalo Bill.”