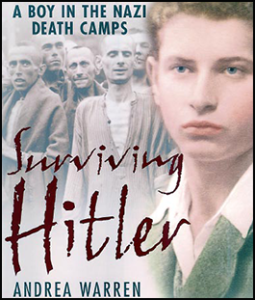 Surviving Hitler:
A Boy in the Nazi Death Camps
(HarperCollins, 2001)

William Allen White Award Winner Overview:
Jack Mandelbaum was 12 years old when the Nazis invaded his native Poland in 1939. Though Jack was Jewish, his family was not particularly religious and he knew little about his religion. They lived in a city and dressed no differently than their mostly Catholic neighbors.

Two weeks after Hitler took over Poland, Jack’s father, a well-to-do businessman, was sent to a concentration camp. Jack, his mother, brother and sister, went deep into the countryside to live with relatives. For the next three years, Jack supported them with the pennies he earned substituting for Jewish men ordered to do forced labor for the Nazis. But at age 15, Jack was separated from his family and sent to the first of a series of concentration camps.

In the midst of this intolerable life, he forged friendships and helped others, determined to survive this nightmare created by Hitler and his willing minions.

Liberated at age 18, Jack built a new life in America. Today he is a successful businessman and a loving father and grandfather. He is also devoted to Holocaust education. He’s a very special man, and I am richer for knowing him. If I have conveyed his generosity of spirit in my book, then I have given a gift to anyone who reads it. This is a man who relishes life, a man who was an incredibly brave boy, a man who can teach us lasting lessons about tolerance, love, and forgiveness.

School Library Journal:
“Through the words and memories of Jack Mandelbaum, Warren presents a harrowing account of a Jewish boy’s experience in Nazi prison camps. By describing events through the boy’s voice, the author does an excellent job of letting his words carry the power of the story. She avoids historical analysis, sticking to Mandelbaum’s experiences, and brings readers into the nightmarish world of the concentration camp with a strong feeling of immediacy. This story works as an introduction to the Holocaust.”

Booklist:
“Simply told, Warren’s powerful story blends the personal testimony of Holocaust survivor Jack Mandelbaum with the history of his time, documented by stirring photos from the archives of the U.S. Holocaust Memorial Museum.”

The Horn Book:
“This book is not only a compelling testimony to the Holocaust but an involving survival story as well. The combination of Mandelbaum’s experience and Warren’s reporting of the whole picture makes this an excellent introduction for readers who don’t know much about history.”

VOYA:
“Warren’s book would be a perfect nonfiction title for fifth through seventh grade. The author gets the tone just right for the age level. She does not skirt the horrors, but because Jack maintains a positive attitude, this book is not a devastating read. Warren includes enough background information so that students new to the subject will have some context, but not so much that the book will seem old hat to students who are already familiar with the Holocaust. This book is a valuable addition to Holocaust literature for children and teens and should be in every middle school collection. Every YA was dying to read it yesterday.”