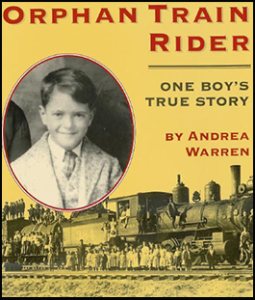 Overview:
Orphan Train Rider: One Boy’s True Story is about Lee Nailling, whose mother died when he was seven. Lee and a younger brother, Leo, were placed in an orphanage. Two years later, along with yet another brother, the boys were sent west on an orphan train.

When it reached a small town in Texas, the youngest brother was quickly chosen by a couple who took him away. Lee and Leo went home together with an elderly couple who had selected Leo, but at his request, agreed to try Lee as well. Two weeks later, they decided they didn’t want Lee, and he went to another home, and then another. By then he was a bitter little boy who distrusted all adults. His new parents, Ben and Ollie Nailling, gradually won him over with kindness and patience, and Lee grew to love them deeply. He was able to stay in touch with his brothers and, late in adult life, he was reunited with his other siblings.

Lee Nailling died in March 2001, and I still miss him. He was a dear man who did all he could to help promote the history of the orphan trains, and he was proud of “his” book.

History of the Orphan Train Riders

We’ll never know the exact number, but we think as many as 250,000 children rode orphan trains between 1865 and 1930. This “placing out” program was the forerunner to modern day foster homes. Some say they were a good thing, others are horrified at the thought of lining children up to be looked over by prospective parents. The same thing happens at today’s “adoption fairs,” where children needing families have the opportunity to meet and mingle with individuals and couples interested in adopting a child.

It’s estimated that perhaps 50 percent of the children found good homes. The other 50 percent were taken as workers or were shuffled from home to home or abused in various ways. Yet even these orphan train riders frequently express their gratitude to the orphan trains for giving them at chance at life–a chance often denied them in the brutal environs of a vast city that offered no shelter.

The children became homeless for a variety of reasons. Many were the offspring of newly arrived immigrants who fell on hard times and could not support their families.

Some were removed from their homes for abuse. Others ran away. Sometimes children were orphaned when their parents died of illness or from accidents.

The Children’s Aid Society of New York City started the orphan trains as a means to find families for these destitute youngsters. The notion was that farm families could use the children’s help, and in return would feed and clothe them, and in every way treat them as members of their families. When it worked this way, as it often did, it was a satisfactory solution all around.

Most children described the selection process at the end of the train ride as traumatic. They wanted badly to make a good impression and be chosen, yet it was so difficult to be stared at, checked over, and sometimes rejected.

In writing both books, I especially enjoyed meeting and interviewing orphan train riders. These kindly people had worked to promote the history of the orphan trains, and all had talked to countless schoolchildren about their experiences. I am privileged to have known them.

School Library Journal (starred review):
“A fascinating book about a social movement that predated foster homes, adoption agencies, and homeless shelters. . . .A wealth of information. . . .rich in human interest. It should be the primary purchase.”

Children’s Literature:
“A true story, and as such, compelling in its revelation of Lee’s emotions and the well-researched details of this American social experiment.”